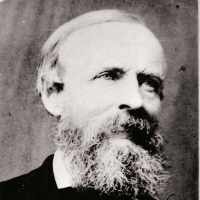 When Jacob Johannes Martinus Bohn was born on 27 April 1823, in Ålborg, Vor Frue, Ålborg, Denmark, his father, Andreas Sebastian Bohn, was 40 and his mother, Dorthea Kirstine Kyhn, was 33. He married Maria Olufsen Thorning on 10 April 1849, in Sankt Mortens, Randers, Denmark. They were the parents of at least 3 sons and 3 daughters. He lived in Ålborg, Denmark in 1840. He died on 14 March 1900, in Salt Lake, Utah, United States, at the age of 76, and was buried in Murray Cemetery, Murray, Salt Lake, Utah, United States.

Put your face in a costume from Jacob Johannes Martinus's homelands.

German: from a short form of the personal name Urban or Alban , altered by folk etymology as if from the German word Bohn ‘bean’.German: metonymic occupational name for a grower of beans, from Middle High German, Middle Low German bōne ‘bean’. Beans were a staple food in the Middle Ages, especially the broad bean, Vicia faba. The green bean, Phaseolus vulgaris, was not introduced from South America until the late 16th century.English variant of Boon .

Jacob Jahannes (John) Martinus Bohn (His father Andreas Sebastine Bohn, and Mother; Dorothea Kirstine Kuhn) When we about ourselves our life we We would like a good testimony to give, Our faili …