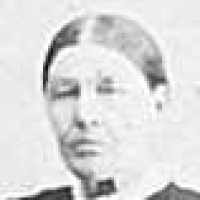 The Life Summary of Ane Kirstine

When Ane Kirstine Andersen was born on 24 August 1813, in Borød, Pedersborg, Sorø, Denmark, her father, Anders Berthelsen, was 22 and her mother, Marie Andersdatter, was 23. She married Hans Peder Larsen on 18 April 1834, in Slagelse, Sankt Peders, Slagelse, Sorø, Denmark. They were the parents of at least 6 sons and 3 daughters. She lived in Gerlev, Slagelse, Sorø, Denmark in 1860. She died on 18 February 1898, in Manti, Sanpete, Utah, United States, at the age of 84, and was buried in Manti Cemetery, Manti, Sanpete, Utah, United States.

Put your face in a costume from Ane Kirstine's homelands.

LARSEN, HON. CHRISTEN P., contractor and builder, Manti, son of Peter and Annie C. (Bertelsen), born in Denmark, January 10, 1840. In 1862 the family emigrated to this country and located in Manti, wh …