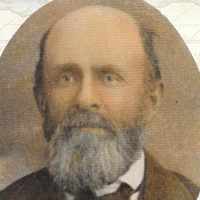 When Benjamin Knell was born on 21 December 1833, in Millbrook, Hampshire, England, United Kingdom, his father, John Corke Knell, was 41 and his mother, Rhoda Fry, was 40. He married Ann Green in 1860, in United States. They were the parents of at least 6 sons and 4 daughters. He died on 29 January 1915, in Pinto, Washington, Utah, United States, at the age of 81, and was buried in Salt Lake City, Salt Lake, Utah, United States.

English (Kent): topographic name from Middle English knelle, knille ‘knoll, hill, hilltop’ (Old English cnyll(e)), for someone who lived at or near a knoll, or from a place so named, such as Knell House in Goring (Sussex). Compare Knill , Knoll .South German: from Middle High German knellen ‘to cause to explode, snap one's fingers’, hence a nickname for a noisy, loud-mouthed person, or in Swabia and Bavaria for someone who cursed a lot.

Indian Mission—1858 In the year 1858 President Young wrote Jacob Hamblin, who, in August, 1857, had been appointed president of the Santa Clara mission, giving him instructions to take a picked gro …