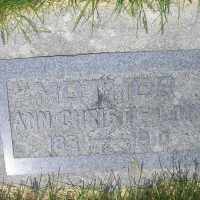 English (northern) and Scottish: from the personal name Christie, a pet form of Christian , which was used for both men and women, and sometimes perhaps also for the male name Christopher .American shortened and altered form of the Scandinavian patronymics Christiansen and Christianson .

Thomas Low's family was a big family up in Cache, and they were all good members of the church. James Low pulled away. Aunt Ann, James' wife was a spiritualist. She became a spiritualist and she was q …