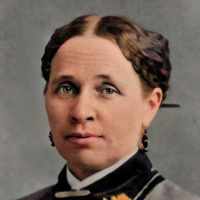 The Life Summary of Amelia Maria

When Amelia Maria Fellows was born on 13 May 1838, in Plymouth, Wayne, Michigan, United States, her father, Albert Gallatin Fellows, was 38 and her mother, Sally Maria Hanford, was 30. She married Edson Whipple on 6 September 1854, in Provo, Utah, Utah, United States. They were the parents of at least 6 sons and 6 daughters. She immigrated to Utah, United States in 1847. She died on 4 July 1890, in Colonia Juárez, Casas Grandes, Chihuahua, Mexico, at the age of 52, and was buried in Colonia Juárez, Casas Grandes, Chihuahua, Mexico.

Put your face in a costume from Amelia Maria's homelands.

English: patronymic from Fellow, from Middle English felau(e) ‘partner, co-worker, companion’ (late Old English fēolaga, from Old Norse félagi, which is composed of fé ‘fee, money’ + legja ‘to lay, place, put’). In Middle English the term was used in the general sense of a companion or comrade, and the surname thus probably denoted a (fellow) member of a trade guild. Compare Fear 1.