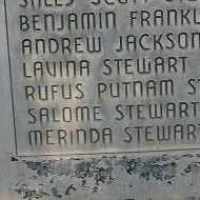 The Life Summary of Rufus Putnam

Put your face in a costume from Rufus Putnam's homelands.

Jackson Township was organized on 19 July 1815.