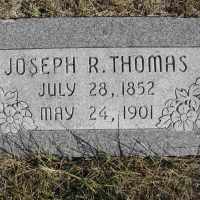 The Life Summary of Joseph Rowlands

When Joseph Rowlands Thomas was born on 28 July 1852, in Haverfordwest, Pembrokeshire, Wales, United Kingdom, his father, James Thomas, was 30 and his mother, Elizabeth Rowlands, was 31. He married Frederica Peterson on 8 October 1883, in Logan, Cache, Utah, United States. They were the parents of at least 1 son and 2 daughters. He lived in Tenby, Pembrokeshire, Wales, United Kingdom for about 10 years and Samaria, Oneida, Idaho, United States in 1880. He died on 24 May 1901, at the age of 48, and was buried in Samaria, Oneida, Idaho, United States.

Put your face in a costume from Joseph Rowlands's homelands.

LIFE OF JOSEPH R. THOMAS Joseph the second son of James and Elizabeth was born July 28, 1852. He was a very quiet and kind person, rather a bashful nature. He married Fredericka Hill, a widow, …