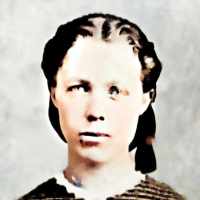 The Life Summary of Lavina Newberry

Put your face in a costume from Lavina Newberry's homelands.

Nathan Davis and Lavina Newberry Morris were married in the Endowment House in Salt Lake City on the 21st of November 1862. He was 48 years old and she was 18. He had another wife, Sarah Wooley, and n …