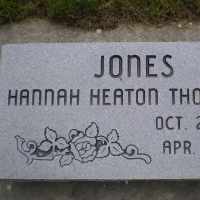 Hannah Was a Member of the Martin Handcart Co.