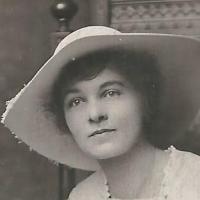 Put your face in a costume from Jean Klingensmith's homelands.

Being modeled after the Boy Scout Association in England, The Boy Scouts of America is a program for young teens to learn traits, life and social skills, and many other things to remind the public about the general act of service and kindness to others.
(1997: 474;2007: 842; 2010: 1092)Scottish (Glasgow): habitational name from Urie (Kincardineshire). The placename may be from Gaelic iubhar ‘yew’ + a placename forming suffix –in.