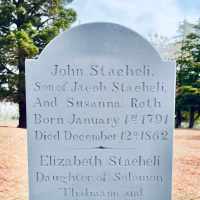 When Johannes Staeheli was born on 1 January 1791, in Amriswil, Thurgau, Switzerland, his father, Hans Jakob Staeheli, was 40 and his mother, Susanna Roth, was 28. He married Elisabeth Thalmann on 3 February 1824, in Amriswil, Thurgau, Switzerland. They were the parents of at least 1 son and 4 daughters. He died on 12 December 1862, in Santa Clara, Washington, Utah, United States, at the age of 71, and was buried in Santa Clara City Cemetery, Santa Clara, Washington, Utah, United States.

Should you wish to find the grave.....

The whole St. George/Santa Clara area has grown a great deal. The Santa Clara cemetery sits on a hill that runs behind the historic jacob hamblin home. The old road that was highway 91 that came ove …