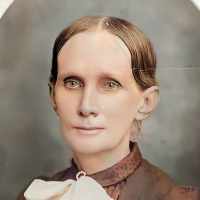 The Life Summary of Emily Amelia

Put your face in a costume from Emily Amelia's homelands.

From a history written by Florence T. Foy in 1992 in a first person narrative form, not directly quoting Emily. The term Mother refers to her step mother Minerva L. Jones Stone. "On 30 September 1848 …