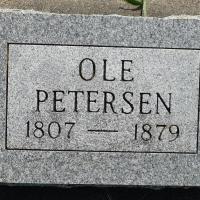 Kuffert Sorensen was established in 1829 by Carl Peter Sorensen as a leather goods company. Today the business has five locations and each are run by a member of the Sorensen family.
Norwegian and Danish: patronymic from Peter .

Charlotte Amelia Petersen was born in Copenhagen, Denmark on the 30th of January 1845. She and her parents joined the church of Jesus Christ of Latter Day Saints the 11th of January 1863. On the 13t …