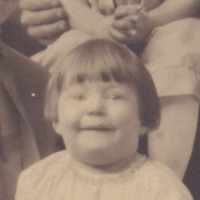 The Life Summary of Deana Bernice

Put your face in a costume from Deana Bernice's homelands.

When the United States entered the World War, the people of Mt. Pleasant loyally responded to every call. One hundred and eighteen boys enlisted from Mt. Pleasant and only three of them died in service.  In June 1918, there was a deposit of $7,500 in the Mt. Pleasant Com¬mercial and Savings Bank by the treasurer of the National American Red Cross, N.S. Nielsen. Local committees were organized within the local Red Cross. With much collaboration with the community, the Doughboy statute was erected to honor the soldiers that fought and died in World War II.

Variant of Diana , coined in 1936 by the Canadian film star and singer Deanna Durbin ( 1921–2013 ), whose original given names were Edna Mae . It is now sometimes used as a feminine form of Dean .