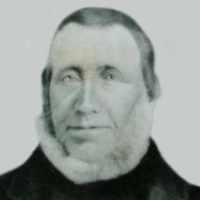 The Life Summary of Hans Nielsen

When Hans Nielsen Toft was born on 13 September 1807, in Grejs, Koldinghus, Denmark, his father, Niels Hansen, was 21 and his mother, Maren Madsen, was 27. He married Ane Thomasdatter on 5 November 1841, in Lund, Horsens, Vejle, Denmark. They were the parents of at least 7 sons and 3 daughters. He lived in Sindbjerg, Nørvang, Vejle, Denmark for about 15 years and Utah, United States in 1870. He registered for military service in 1867. He died on 25 February 1895, in Monroe, Sevier, Utah, United States, at the age of 87, and was buried in Monroe City Cemetery, Monroe, Sevier, Utah, United States.

Put your face in a costume from Hans Nielsen's homelands.

Some characteristic forenames: Scandinavian Hjalmer, Nels, Thorval.English (Lancashire, Cheshire and Staffordshire): habitational name from any of various places, for example in Cambridgeshire, Lincolnshire, Norfolk, and Warwickshire, named with Middle English toft(e) (Old Norse topt, Old Danish toft), denoting a plot of land on which a house stands or formerly stood. The surname may also be topographic, for someone who lived by or on a toft.Scandinavian: habitational name from any of several farmsteads or placenames derived from Old Norse topt ‘curtilage, site, homestead’.