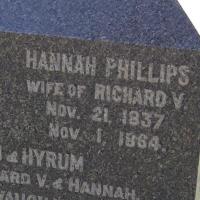 The Life Summary of Ann or Hannah

Learn about Ann or Hannah's homeland.

Put your face in a costume from Ann or Hannah's homelands.

Commemorative verses about Hannah, the wife of Richard V. Morris. Hannah was lovely and remarkable—good and virtuous, From the days of her childhood, Worthy of praise in every way A loving parent to h …