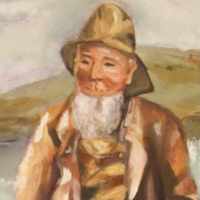 The Life Summary of Johan

When Johan Olsen was born on 11 December 1805, in Røyken, Buskerud, Norway, his father, Ole Jacobsen Heggum, was 28 and his mother, Anna Marie Jensdatter, was 20. He married Karen Olsdatter on 4 June 1830, in Røyken, Buskerud, Norway. They were the parents of at least 6 sons and 2 daughters. His occupation is listed as shoemaker,then fisherman in Norway. He died on 21 August 1879, in Levan, Juab, Utah, United States, at the age of 73, and was buried in Levan Cemetery, Levan, Juab, Utah, United States.

Put your face in a costume from Johan's homelands.

Royal order issued by the King of Norway and Denmark in 1810 required everyone to have a certificate of smallpox vaccination. This was also recorded in the Church records. 33

Compiled by Sherrie A. Hundley, Great-great granddaughter (John and Karen Olsen were the parents of our great-grandfather, Martin M. Olsen, and six other children.) This information is from an autobi …