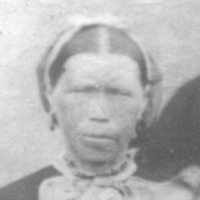 The Life Summary of Karen

When Karen Pedersdatter was born on 27 April 1817, in Frederiksværk, Frederiksborg, Denmark, her father, Peder Jørgensen, was 27 and her mother, Karen Jensdatter, was 23. She married Hans Larsen on 4 November 1837, in Melby, Kronborg, Denmark. They were the parents of at least 2 sons and 3 daughters. She lived in Melby, Strø, Frederiksborg, Denmark for about 15 years. She died on 22 November 1892, in Newton, Cache, Utah, United States, at the age of 75, and was buried in Newton Cemetery, Newton, Cache, Utah, United States.

Put your face in a costume from Karen's homelands.

Life Story and Research on Karen Pedersen or Petersen

Karen was the second child of eight born to her father's family. She was born in Frederiksvaerk (Vinderod Parish) which is different from any of the other children. Her marriage and confirmation rec …