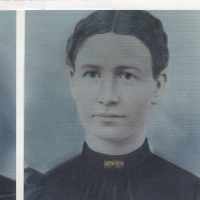 When Sarah Evans was born on 15 September 1847, in Ebbw Vale, Monmouthshire, Wales, United Kingdom, her father, David Evans, was 31 and her mother, Catherine Williams, was 29. She married Charles Magnus Olasson Ahlstrom in 1866. They were the parents of at least 4 sons and 3 daughters. She immigrated to New York, United States in 1861 and lived in Trevethin, Monmouthshire, Wales, United Kingdom in 1851. She died on 17 October 1881, in Cedar City, Iron, Utah, United States, at the age of 34, and was buried in Cedar City, Iron, Utah, United States.