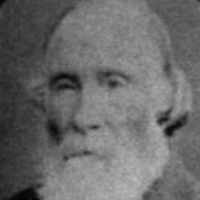 When William Aird was born on 3 March 1821, in Kilmarnock, Ayrshire, Scotland, United Kingdom, his father, William Aird, was 38 and his mother, Janet Thomson, was 36. He married Elizabeth McLean on 4 February 1853, in Newton on Ayr, Ayrshire, Scotland, United Kingdom. They were the parents of at least 3 sons and 3 daughters. He lived in Spanish Fork, Utah, Utah, United States in 1860. He registered for military service in 1866. He died on 4 July 1889, in Heber City, Wasatch, Utah, United States, at the age of 68, and was buried in Heber City Cemetery, Heber City, Wasatch, Utah, United States.

Scottish: habitational name from either the medieval lordship of The Aird (Inverness) or from Aird Farm near Hurlford, Ayrshire. Both are named from Gaelic àird(e) ‘height, promontory’, or ‘headland’, from the adjective àrd ‘high, lofty’, cognate with Latin arduus ‘steep, difficult’. Compare Ard .

William Aird excerpt from How Beautiful Upon the Mountains p.261

William Aird Wm. Aird, born March 3, 1821. Married Elizabeth McClean. Died July 4, 1889, in Heber, Utah. Early in life he was converted to the gospel, became an Elder in the Church, and did missiona …