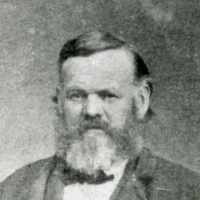 The Life Summary of William Bannister

When William Bannister Poppleton was born on 15 October 1823, in Moulton, Lincolnshire, England, United Kingdom, his father, William Poppleton, was 26 and his mother, Mary Bannister, was 31. He married Sarah Stennett on 4 August 1844, in Great Hale, Lincolnshire, England, United Kingdom. They were the parents of at least 6 sons and 2 daughters. He died on 16 August 1883, in Wellsville, Cache, Utah, United States, at the age of 59, and was buried in Wellsville, Cache, Utah, United States.

Put your face in a costume from William Bannister's homelands.

HISTORY OF WILLIAM POPPLETON - PIONEER Written by Bertha Riggs Poppleton Maughan In the village of Moulton, Lincolnshire, England on October 15, 1823 a baby boy was born to William and Mary Poppleton …