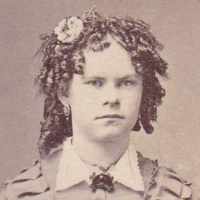 When Rachel Dunlop was born on 18 September 1858, in Glasgow, Lanarkshire, Scotland, United Kingdom, her father, Robert Dunlop, was 40 and her mother, Mary Matilda Tyrrell, was 44. She married Edgerton R Ferguson in 1874, in Wellington, Hillier, Prince Edward, Ontario, Canada. They were the parents of at least 4 sons. She lived in Bridgeton, Lanarkshire, Scotland, United Kingdom in 1861. She died on 15 May 1879, in Ibapah, Tooele, Utah, United States, at the age of 20, and was buried in Ibapah Cemetery, Ibapah, Tooele, Utah, United States.