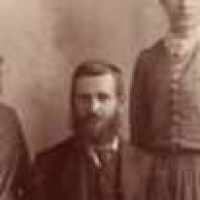 The Life Summary of John B

When John B Porteous was born on 28 December 1835, in Kirkmuirhill, Lanarkshire, Scotland, United Kingdom, his father, James Porteous, was 20 and his mother, Janet Steel, was 21. He married Martha Park on 8 June 1864, in Salt Lake City, Salt Lake, Utah, United States. They were the parents of at least 6 sons and 5 daughters. He immigrated to New Orleans, Orleans, Louisiana, United States in 1848 and lived in Lesmahagow, Lanarkshire, Scotland, United Kingdom in 1841 and St. Louis, St. Louis, Missouri, United States in 1850. He died on 22 July 1892, in West Point, Calaveras, California, United States, at the age of 56, and was buried in West Point, Calaveras, California, United States.

Put your face in a costume from John B's homelands.

English and Scottish: nickname from Middle English and Older Scots port(e)hors, portas, porte(i)s, portos, portus, porthous, porteus, portewas ‘portable breviary, prayer book’. It is a borrowing of Old French porte-hors, Anglo-Norman French porteose, porteho(r)s, port(h)eus, literally something ‘carried out of doors’. The surname may have been given to someone who habitually carried such a book, or for a scribe employed to write them. In modern times it is chiefly a Scottish surname, which probably accounts for its presence in northern England, but the name is also well evidenced in southeastern England in the medieval period and in northern Lincolnshire since the 17th century. The Scottish surname became established in Ireland by the mid 16th century.