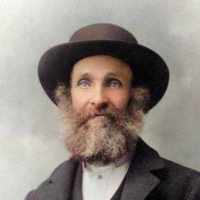 This picture is hanging in his old home in the Speirs Family Farm in Tooele.