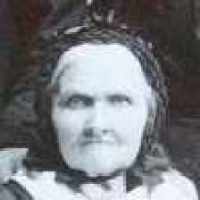 When Elizabeth Hutchison was born on 14 October 1814, in Donegal, County Cork, Ireland, her father, William Hutchinson, was 34 and her mother, Mary Spears, was 34. She married Robert Moyes on 21 May 1836, in Abbey, Renfrewshire, Scotland, United Kingdom. They were the parents of at least 7 sons and 1 daughter. She lived in Renfrewshire, Scotland, United Kingdom for about 10 years. She died on 16 August 1906, in Ogden, Weber, Utah, United States, at the age of 91, and was buried in Ogden City Cemetery, Ogden, Weber, Utah, United States.