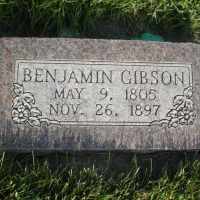 Benjamin Gibson: 1805-1897 Copied from the journal of Benjamin Gibson by his daughter, Jane Sanders, and recopied by Ellen Sanders Cordon (~and again retyped 1 May 2014, to upload to Family Tree b …