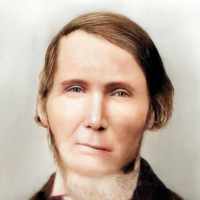 The Life Summary of John Kenny

When John Kenny Richards was born on 16 May 1805, in District Judiciaire de Québec, Canada East, British Colonial America, his father, John Wilson Richards, was 36 and his mother, Marie Angelique Kenny, was 17. He married Agnes Hill on 25 December 1830, in Bathurst, Lanark, Ontario, Canada. They were the parents of at least 6 sons and 5 daughters. He lived in Pottawattamie, Iowa, United States in 1850. He died on 15 November 1889, in Mendon, Cache, Utah, United States, at the age of 84, and was buried in Mendon City Cemetery, Mendon, Cache, Utah, United States.

Put your face in a costume from John Kenny's homelands.