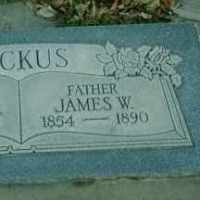 The Life Summary of James Williams

When James Williams Backus was born on 27 April 1854, in Blackburn, Lancashire, England, United Kingdom, his father, James Backhouse, was 34 and his mother, Jane Williams, was 29. He married Charlotte Flora Natalia Petersen Madsen on 24 April 1876, in Salt Lake City, Salt Lake, Utah, United States. They were the parents of at least 5 sons and 3 daughters. He died on 20 September 1890, in Pleasant Grove, Utah, Utah, United States, at the age of 36, and was buried in Bountiful, Davis, Utah, United States.

Put your face in a costume from James Williams's homelands.

James William Backhouse was born 27 Apr 1854 in Blackburn, Lancashire, England to James Backhouse and Jane Williams Backhouse. His parents were active in the Society of Friends or Quakers. His father …