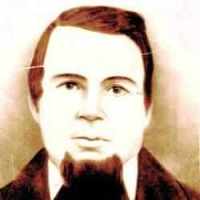 When Jacob Hofheins was born on 14 October 1812, in Karlsruhe, Baden, Germany, his father, Johann Michael Hofheinz, was 39 and his mother, Elisabeth Barbara Magdalena Kornmueller, was 36. He married Mary Ann Elizabeth Stevenson in July 1835, in Philadelphia Monthly Meeting, Philadelphia, Pennsylvania, United States. They were the parents of at least 3 sons and 1 daughter. He died on 25 August 1890, in Levan, Juab, Utah, United States, at the age of 77, and was buried in Levan Cemetery, Levan, Juab, Utah, United States.

On Oct 19, 1813, Germany defeats Napolean. The commanding officer for the Allied side was Prince Karl Phillipp Schwarzenberg.

German: distinguishing name for a man called Heinz who lived on or was in charge of a farm or estate (see Hoff ). Compare Huffhines and Huffines .