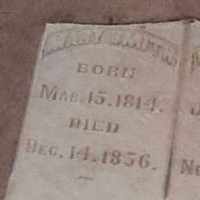 The Life Summary of Rebecca Mary

Put your face in a costume from Rebecca Mary's homelands.

Edited by Janet Franson Jeffery William P. Smith was born January 22, 1810 at Tottington, Lancashire, England, a son of Alice Smith and Dr. Thomas Smith. He was the fourth child, of sev …