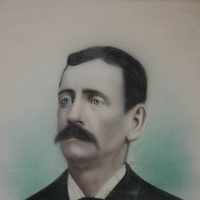 When Samuel Shaw was born on 2 January 1841, in Ashton-under-Lyne, Lancashire, England, United Kingdom, his father, Samuel Shaw, was 39 and his mother, Sarah Ibbotson, was 29. He married Margaret Taylor on 13 May 1860, in Ashton-under-Lyne, Lancashire, England, United Kingdom. They were the parents of at least 9 sons and 5 daughters. He died on 11 November 1919, in Nephi, Juab, Utah, United States, at the age of 78, and was buried in Vine Bluff Cemetery, Nephi, Juab, Utah, United States.

English (Yorkshire and Lancashire): from Middle English s(c)hawe, s(c)haghe ‘small wood, grove, thicket’ (Old English sceaga). The surname may be topographic, for someone who lived in or by a small wood, or habitational, for someone from any of the many places so named. Shaw and Shawe are most frequent in Lancashire and Yorkshire, where Shaw in Oldham (Lancashire) may be a principal source of the surname. The English and Lowland Scottish surname was also established in Ireland in the 17th century.

Irish (Down and Antrim): adopted for Ó Síthigh ‘descendant of Sítheach’, a personal name based on sítheach ‘peaceful’. Compare Sheehy .

History of Samuel and Margaret Taylor Shaw By Elva S. Davis (granddaughter) In Ashton, in the County of Lancashier, England Samuel Shaw was born on the 2nd of January, 1841. He was the son of Samu …