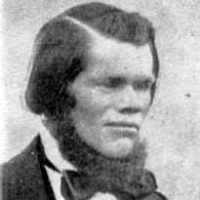 When James Craig was born on 1 June 1821, in Ennistimon, County Clare, Ireland, his father, David Creagh, was 32 and his mother, Elizabeth MacNamara, was 28. He married Margaret Ann McMulkin on 28 August 1844, in Lockport, Niagara, New York, United States. They were the parents of at least 5 sons and 2 daughters. He died on 2 March 1868, in Santa Clara, Washington, Utah, United States, at the age of 46, and was buried in Santa Clara, Washington, Utah, United States.

Scottish: topographic name for someone who lived near a steep or precipitous rock, Older Scots crag, craig. Compare the synonymous English Cragg .Manx: either a shortened form of Gaelic Mac Concharraige ‘son of Cu Charraige (‘hound of the rock’) or possibly of Mac Thorveig ‘son of Thorveig’, from the Old Norse personal name Thórveig (from the god's name Thórr + veig ‘pith, strength’).

James Craig Bugler of the Pioneers

JAMES CRAIG, one of the original pioneers of Utah, and known as the "Bugler of the Pioneers", was born in Ireland in 1821, a son of David and Elizabeth Craig. After his arrival in the Salt Lake Valley …