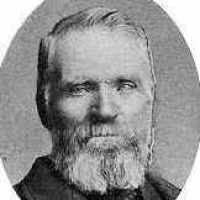 English and German: from the personal name Casper (in English this is a variant of Jasper , in German a variant of Kaspar and Kasper ), Latin Caspar(us), Gaspar(us). It is widely understood to be from the Persian word gazbar ‘treasurer’, and was ascribed by popular tradition in Europe to one of the three Magi (see also Baltazar and Melchior ) who according to the Bible (in which they are not named) brought gifts to the new-born Christ. Their supposed remains were taken to Cologne from Constantinople in the 12th century; hence the popularity of the name Casper and its variants in Germany and elsewhere in central Europe. In North America, the English form of the surname has absorbed cognates from other languages, e.g. Polish Kasper , Czech Kašpar (see Kaspar ), Croatian Gašpar (see Gaspar ), and Slovenian Gašper (see Gasper ), and also their derivatives.

Written by granddaughter Flora Bean Horne: Elizabeth Lewis Bean was a noble, progressive, intelligent type of woman. It was said of her that her spirituality and understanding were her dominant …