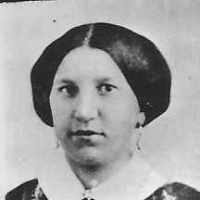 The Life Summary of Hannah Ann

Put your face in a costume from Hannah Ann's homelands.

Hannah Ann Wright was born on 14 May 1840 in Philadelphia,Philadelphia, Pennsylvania to Abraham Reister and Mary Ann Brockerman Wright. She was the third of nine children, three girls and six boys. …