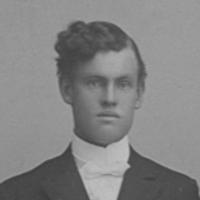 The Life Summary of Heber Andreas

Put your face in a costume from Heber Andreas's homelands.

Poem Written For Norman Heber Anderson before His Mission