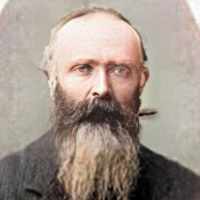 The Life Summary of Dudley

When Dudley Chase was born on 22 May 1835, in Sparta, Livingston, New York, United States, his father, Ezra Chase, was 39 and his mother, Tirzah Wells, was 38. He married Samantha Crismon on 19 July 1857, in San Bernardino, San Bernardino, California, United States. They were the parents of at least 5 sons and 5 daughters. He died on 24 February 1906, in Idaho Falls, Bonneville, Idaho, United States, at the age of 70, and was buried in Ogden City Cemetery, Ogden, Weber, Utah, United States.

Put your face in a costume from Dudley's homelands.

Biography of Dudley Chase Written by his daughter, Mrs. Abigail Chase Gudmundson Edited 2014 Dudley Chase, son of Ezra Chase and Tirzah (Wells) Chase, was born the 22 May 1835 in Sparta, Livingston, …