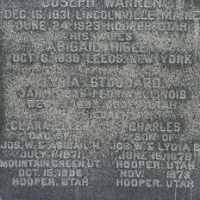 The Life Summary of Lydia Elizabeth

Put your face in a costume from Lydia Elizabeth's homelands.

ABIAH WADSWORTH taken from book "Abiah Wadsworth and his Wives and Family Biographies" Abiah Wadsworth was born May 25, 1810 in Lincolnville, Maine. He died April 18, 1899 in Taylor, Idaho. His paren …