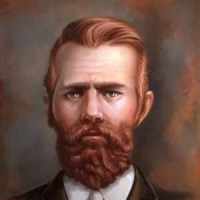 When Peter Nielson was born on 23 March 1824, in Povlsker, Bornholm, Denmark, his father, Niels Jensen, was 33 and his mother, Gjertrud Kristine Pedersdatter, was 43. He married Marie Helene Frederika Posemann on 7 March 1851, in Copenhagen, Copenhagen, Denmark. They were the parents of at least 1 son. He immigrated to New York, United States in 1861 and lived in Bodilsker, Bornholm, Denmark in 1840. He died on 23 January 1886, in Colonia Juárez, Casas Grandes, Chihuahua, Mexico, at the age of 61, and was buried in Colonia Juárez, Casas Grandes, Chihuahua, Mexico.

I don't feel like it, but they say I am a hundred and twenty-two years old. I was made by the loving hands of Huldah Fransika Lassen when she completed her apprentice-ship in sewing in 1856 or soon a …