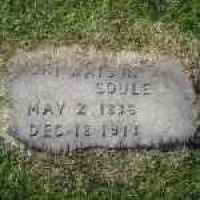 The Life Summary of Emory Watson

Put your face in a costume from Emory Watson's homelands.

English (Gloucestershire): of Norman origin, a variant of Soul .French (Soulé): topographic name for someone who lived in a house exposed to sun, a variant of Soulier 2; or a habitational name from Soulé, the name of several places in the southwestern part of France.History: George Soule (1600–80), one of the passengers on the Mayflower in 1620, was one of the founders of Duxbury, MA, where he became comparatively wealthy. He left eight children.

Information taken from a history written by Annie Secrist Layton Jacob Moroni Secrist was the son of Jacob Foutz Secrist, who was born 19 September 1818 in Tomstown, Franklin County, Pennsylvania, an …