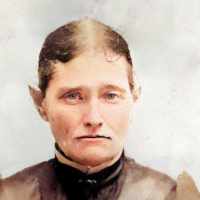 The Life Summary of Mary Belinda

Put your face in a costume from Mary Belinda's homelands.

English (of Norman origin) and French: from the Norman French personal name Bacun, derived from the ancient Germanic name Bac(c)o, Bahho, based on the element bag ‘(to) fight, (to) dispute’. The name was relatively common among the Normans in the form Bacus, of which the oblique case was Bacon.English and French: from Middle English, Old French bacun, bacon ‘bacon’ (a word of ancient Germanic origin, akin to Back 3), probably a metonymic occupational name for a preparer and seller of cured pork.History: Gilles Bacon from Normandy, France, is documented in Quebec City, QC, in 1647. — Michael Bacon from England arrived in Dedham, MA, in 1640. Nathanial Bacon, from Stratton, Cornwall, arrived in Barnstaple, MA, in 1639. Another Nathaniel Bacon (1647–76), from Friston Hall, Suffolk, emigrated to VA and settled at Curl's Neck on the James river.

Evidence from census and genealogical records proves the Bacon family traveled to Utah in 1851. Her birth date is confirmed by the Eastern Idaho Death Records Database. Company Unknown (1851) Age at …