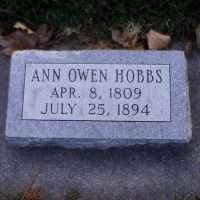 Life and Labors of Ann Owen Hobbs By DeEsta Naylor, Logan Ann Owen, it would seem, was destined in another world to perform a life of usefulness and devotion as a lady’s maid to those who took her in …