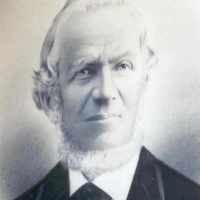 When John Horrocks was born on 14 April 1821, in Bolton, Lancashire, England, United Kingdom, his father, John Horrocks, was 44 and his mother, Ann Howarth, was 24. He married Ann Horrocks on 10 July 1842, in Bolton le Moors St Peter, Lancashire, England, United Kingdom. They were the parents of at least 3 sons and 7 daughters. He died on 16 July 1896, in Heber City, Wasatch, Utah, United States, at the age of 75, and was buried in Heber City Cemetery, Heber City, Wasatch, Utah, United States.

English (Lancashire):perhaps a habitational name from a lost locality on the River Ribble called Hurroc, alluded to in Hurrocford (about 1330), now modern Horrocksford in Clitheroe (Lancashire). Hurroc- may be linked to modern northern English dialect hurrock ‘piled up heap of stones or rubbish’ but there is no evidence so far for a Middle English surname atte hurroke.variant of Horwick (see Horwich ).