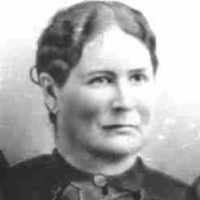 The Life Summary of Sabina Ann

When Sabina Ann Adams was born on 16 February 1837, in New Perth, Kings, Prince Edward Island, Canada, her father, Arza Matson Adams, was 33 and her mother, Sabina Clark, was 24. She married Alexander Nicoll Sr. on 17 February 1854, in American Fork, Utah, Utah, United States. They were the parents of at least 4 sons and 8 daughters. She died on 8 April 1912, in St. Johns, Apache, Arizona, United States, at the age of 75, and was buried in St. Johns, Apache, Arizona, United States.

Put your face in a costume from Sabina Ann's homelands.

Arza Adams was born Jan. 22, 1804 in the District of Johnstown County of Leeds Township of Bastard, Canada. He was the oldest son of Joshua Adams and Elizabeth Chipman who were married in Augusta Cou …