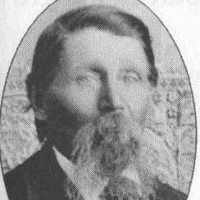 When Swen Carlsson was born on 16 February 1829, in Sweden, his father, Carl Jönsson, was 53 and his mother, Boel Andersdotter, was 31. He married Bengta Bengston Larsdotter on 17 December 1852, in Asmundtorp, Malmöhus, Sweden. They were the parents of at least 4 sons and 2 daughters. He died on 31 May 1902, in Logan, Cache, Utah, United States, at the age of 73, and was buried in Logan, Cache, Utah, United States.