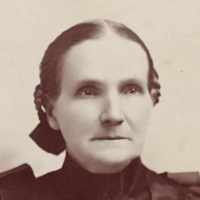 The Life Summary of Alice Eliza

Put your face in a costume from Alice Eliza's homelands.

1 English: (i) nickname from the Middle English salutation godne dæie, about 1205, godun dai, about 1250, god dai after 1300 ( OED ), ‘(have a, God give you a) good day!’ Compare Haggerty (2) and the salutation ‘good morrow’ in Walter Godemorwe (Godemorwen), 1327 in Subsidy Rolls (Essex). Some of the following bearers may alternatively belong with (2), (3), or (4). (ii) nickname, occupational name, possibly in some instances from Middle English god(e) day(e) (or dey(e)) ‘good dairy man’ ( see Day ).2 English: locative name from Middle English god(e) ‘good’ + hei(e) ‘enclosed plot, field’ (Old English gōd + (ge)hæg), for someone who lived ‘(at the) good enclosure’. Compare Goodacre , Goodfield .3 English: status name, variant of Goodeve , whether from the Middle English female personal name Godive or from the word goodwife, goody.