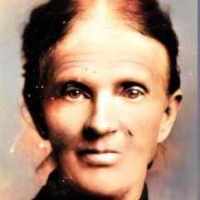 English and Scottish: habitational name from any of numerous places throughout England and Scotland so called, from Old English thorn ‘thorn tree’ + tūn ‘farmstead, estate’. The placename is most frequent in northern England, especially Yorkshire, where there are at least 16 possible sources for the surname.

Put your face in a costume from Lydia Meacham's homelands.