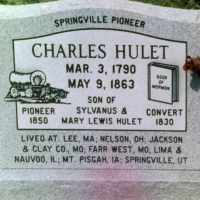 Altered form of English Hewlett .French: from a pet form of the personal name Hue or Hugues . This surname is very rare in France.