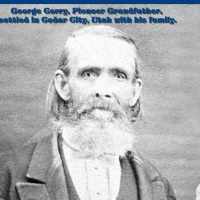 Trek Across the Plains--George and Margaret Climie Corry