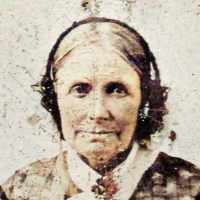 1 Norman, English: see Brickell .2 English: nickname from Middle English breken ‘to break’ + all ‘all, everything’. Some of the post-medieval bearers given here may belong to (1).

Ellen Breakel Neibaur and the Shoes

Ellen Breakel Neibaur joined the Church with her husband, Alexander Neibaur, in Preston, England in 1838. They sailed from Liverpool on February 7, 1841 on the ship “Sheffield” to America in the sec …