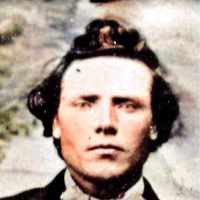 When Edward Wildman was born on 5 November 1836, in Norwood, Asphodel-Norwood, Peterborough, Ontario, Canada, his father, John Wildman, was 42 and his mother, Elizabeth Willan, was 42. He married Jane Baxter on 8 April 1861, in South Monaghan, Northumberland, Ontario, Canada. They were the parents of at least 4 sons and 5 daughters. He lived in Asphodel, Peterborough, Ontario, Canada in 1861 and Smithfield, Cache, Utah, United States for about 30 years. He died on 8 November 1913, in Bennington, Bear Lake, Idaho, United States, at the age of 77, and was buried in Bennington Cemetery, Bennington, Bear Lake, Idaho, United States.